Apple’s CarPlay System Brings the Dashboard Firmly Into the Future

For years, Apple has represented the vanguard of technology and its union with beautiful design. Bearing that in mind, it was only a matter of time before the California company fully integrated itself into the automotive sphere.

Debuting at the Geneva Motor Show, Apple’s new CarPlay system will be available later this year in select Ferrari, Mercedes-Benz, and Volvo models, followed soon after by a bevy of other marques. This new system repurposes the automotive dashboard, with a high-resolution digital touch screen dominating the center stack. This allows the driver to use the CarPlay system, which provides access to iMessages, music, Apple Maps, and a host of other applications.

The interface is designed to emphasize ease of use and speed, so that it doesn’t distract drivers from the road for too long. With this in mind, there is a heavy emphasis on Apple’s Siri voice-control system, which allows drivers to issue commands without taking their eyes off of the road. The driver can access Siri either by holding down an option on the touchscreen or by touching a steering-wheel-mounted paddle.

The Apple Maps function also draws on a user-generated history, culled from archived emails, messages, and contacts that can quickly suggest and save locations for easy access.

The system arrives after almost a year of promises and hints from Apple, and it’s safe to say that, at least in terms of content and capability, it exceeds initial expectations. When news of an Apple automotive presence first broke last year, most industry pundits expected simple Siri integration, not a full Maps and messaging experience.

While it remains to be seen how the system will fare in the automotive market at large, it presents an intriguing step forward in terms of the integration of media technology and the car. Particularly given growing concerns regarding distracted driving, CarPlay’s simple aesthetic and emphasis on easy speed should represent a potential watershed moment in terms of finding the proper balance between engagement with technology and engagement with the road.

Here’s a breakdown of the system against its competitors: 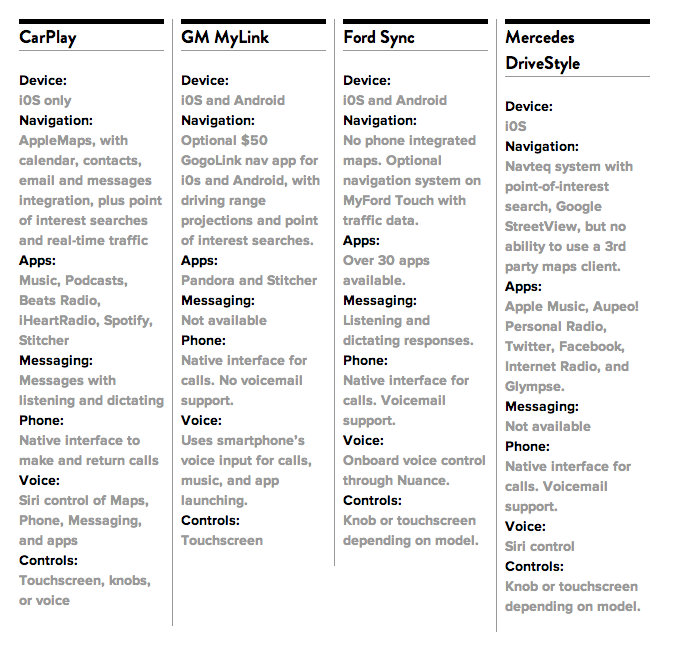 What do you think about Apple’s CarPlay system? Do you think it will come to dominate our dashboards? Let us know in the comments section, or on our Facebook, Twitter and Google + pages.