Audi and the Future of Lighting Technology

by elizabethfrey
in Automotive, Design, Technology
0

German carmaker Audi has always prided itself on its lighting technology, from adaptive lighting that illuminates the road to clearer LED daytime lights and more. Bold, effective lighting on a car not only makes a strong style statement, but also increases safety, providing both drivers and other cars with more information about their environment. With that in mind, Audi is currently developing new lighting techniques that will move automotive technology to a future of highly intelligent vehicles and safer roads. 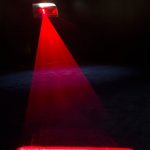 The laser diode comprising Audi’s laser tail light allows the vehicle to communicate with other drivers about the surrounding environment. In good weather, the laser angles downward in a fan-shaped arc toward the road, and draws a clear red line on the pavement, highlighting road conditions to trailing vehicles and suggesting an optimal following distance. In poor conditions like heavy rain and fog, lasers pass through water droplets far more effectively than normal lighting, and make the laser-enabled car much more visible to other drivers. 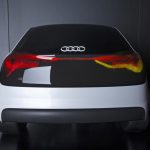 Somewhat more fanciful than the laser tail light, the completely unique style of lighting Audi has dubbed The Swarm seeks to act as a shifting infographic of driving conditions and vehicle movement. A portion of the car’s rear panel features an array of small red lights, creating what appears to be a solid surface of illuminable area.

As the vehicle moves, the red lights swarm around the car in a way akin to a school of tiny fish, indicating the driver’s intentions. The colors and movements of that swarm adjust depending on the actions and movements of the vehicle, showing, for example, whether the car is turning, breaking or accelerating. The goal is to prevent the following vehicle from ever doubting the actions of the car in front of him. 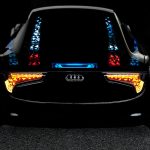 Perhaps the most out-there of Audi’s demonstrations, OLED panels (the O stands for “organic,” as opposed to the semiconductor crystals used in current LEDs) could be installed anywhere on the outside or interior of the vehicle as a millimeters-thick coating. These lights could react to almost any stimulus: lights on the contours and door handles of the car could guide the owner to the handles in darkness, for instance, or provide subtle, useful lighting in the interior at night without disrupting night vision.

At the core of these technologies is the vision of a smarter vehicle that can interact with its environment and communicate with other drivers. In the context of other technologies, like Google’s driverless vehicle and cars equipped with lane departure warning systems, it suggests a future where cars can cooperate with each other to help prevent accidents, reduce traffic congestion and maintain a smooth, comfortable ride. Our world is ruled by smartphones, iPads and other high-tech gadgets, and people want cars that reflect the technology of the age in which we live. The faster that manufacturers incorporate these features, the faster they will sell.

For now, these technologies are only in development, but the theories behind each of them, including increased attractiveness, improved communication and greater safety, will likely permeate whatever fixtures are on the automobiles of the future.