As Honda rolls out the Civic Natural Gas across the nation, dealers like Paragon Honda are eager to get in the game to help promote this cleaner alternative-fuel vehicle. Though natural gas vehicles are popular in other parts of the world, the Civic Natural Gas (CNG) is the only compressed natural gas vehicle available in the United States. Dealers who are among the first to start selling the CNG will set a leading example for others across the nation. 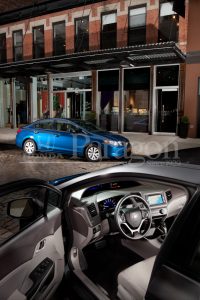 Because it runs on compressed natural gas, the CNG offers a unique option for drivers who want a “greener” car but are hesitant to switch to limited-range electric vehicles. With an estimated range of about 190 miles, the Civic Natural Gas has a 110-hp, 1.8-liter, 16-valve, SOHC i-VTEC engine that gets about the same gas mileage of a gasoline vehicle: 27 city/38 hwy/31 combined. Refueling only takes a few minutes, and drivers can locate compressed natural gas stations using the available Honda Satellite Linked Navigation System.

Previously only available in four states, Honda’s natural gas alternative is spreading across the nation with the help of dealers like Paragon Honda. From the beginning, Paragon Honda General Manager Brian Benstock has been committed to promoting the Civic Natural Gas. As one of the first Honda dealers in the New York area to sell the CNG, Paragon Honda’s support in helping to jumpstart this cleaner technology is critical and makes them a role model in adopting and marketing greener vehicles throughout the industry.

With that in mind, Paragon Honda was enthusiastic about marketing and selling the Civic Natural Gas. To help promote the vehicle, Paragon Honda and Tier10 organized a photo shoot with esteemed photographer Douglas Sonders. As Sonders snapped images of the green car juxtaposed against the urban city, we captured behind the scenes footage, lending insight into the inspiration behind the photo shoot and the campaign.

In the backdrop of a city like New York, the need for cleaner fuel alternatives couldn’t be clearer. Historically, Honda has set the bar in developing environmentally conscious vehicles and processes, so it’s no wonder that Paragon Honda would share the vision of selling a greener car in the U.S. market. With the CNG, Honda is taking natural gas technology to a larger playing field. By acting as an ambassador for Honda, Paragon helps pave the way for the CNG and the future of compressed natural gas technology.

CBS News New York has just released a piece called, “Wave Of The Future? Natural Gas-Powered Cars Gaining In Popularity.” Benstock is quoted in the article explaining, “Right now the technology exists with the CNG car to get a more fuel efficient vehicle and a cleaner vehicle with an abundant supply of fuel right here in the USA.”