Facebook to Lose 80% of Users According to New Princeton Study

The Internet is perhaps the greatest single invention by mankind since the debut of the wheel. It has shaped every aspect of our modern world and has spread with astonishing quickness, permeating every aspect of modern life, from shopping to schoolwork.

Social media and its various permutations have been perhaps the most visible and highly discussed offshoots of the web, with Facebook being the king of them all. The website boasts over 1.2 billion active users, holds a valuation of roughly 100 times that, and inspired a film that was nominated for eight Oscars, of which it won three. It’s no great exaggeration to say that Facebook has been on top of the world for the past several years. This staggering success is what makes a new study released by researchers at Princeton University so shocking.

Researchers at the highly regarded Ivy League institution have declared that Facebook, the second most highly visited website on the planet, will lose 80 percent of its peak user base between 2015 and 2017. 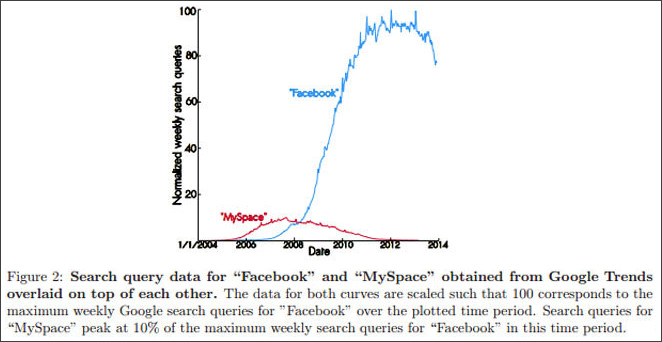 This stunning conclusion was based on the results of a study that used epidemiological models, which are typically used to study the trajectories of infectious diseases.

The study postulated that recovery necessitates contact with a non-diseased entity, in this case a non-Facebook user, and that the numbers of these “recovered” users would grow given the network’s decreasing popularity among college-aged users and younger. Many digital media experts agree with the general headlines that Facebook has lost its cool factor, but say that this may not prove to be disastrous for the site, given its communication utility.

The study is based primarily on data harvested from the rise and fall of the website Myspace, which was arguably the first large-scale social network and served as Facebook’s immediate predecessor in terms of social media dominance. Much like Facebook, Myspace once dominated social media, but suffered a drastic decline as users migrated from the site following mismanagement by parent company Newscorp and a series of high-profile news stories that linked the site to instances of sexual abuse among members.

Although it may seem premature to announce the death of one of the world’s most popular websites, this new study should provoke some serious self-reflection on the part of Facebook’s leadership. While the study has not yet been peer-reviewed, it makes a compelling, if somewhat unusual point that is supported by dropping visit rates from key demographics.