Finding the Blind Spots Part 1: A Look at Product Placement in House of Cards

Like many people, you probably spent your Valentine’s Day Weekend in front of the TV binge-watching the second season of House of Cards.

If you weren’t totally engrossed by Frank and Claire Underwood’s scheming, you may have noticed something – a bushel full of brand names and product placements. The second season contained clear appearances from Dunkin Donuts, Stella Artois, Cadillac, Blackberry and Mercedes-Benz, to name a few.

This is nothing new to the series, as season one featured a heavy dose of Apple products. Season two also had nothing compared to the season one scene in which Frank and right-hand man Doug Stamper have nine Apple devices between them: 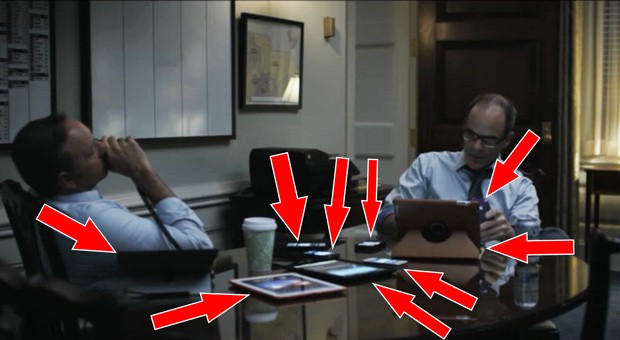 That scene aside, product placement is obviously nothing new. In fact, it is a $4.75 billon dollar industry in the U.S. alone. Many companies and advertisers use the silver screen as their destination of choice (i.e., Reese’s Pieces in ET), but many TV shows are jumping into the action.

However, Apple and other companies don’t seem to be paying TV studios to feature these products. Rather, they are simply donating the products to the studio. Their rationale: the more products they donate the higher the likelihood of those products making it into a scene because sets often only have so many electronic props.

But the question remains, why would companies do this? There are several reasons but a main one is our emotions. When we watch a program or character that we like or dislike, we automatically begin to associate those feelings with the brands and products that they use. This is called implicit self-identification. However, there is a catch. These placements have to be implicit enough so they don’t interfere with the narrative. The picture above breaks this very rule, despite the plot supporting the use of nine iDevices (Frank and Doug are monitoring radio feeds in order to seize on a situation in which they could take advantage of someone). In reality, there are virtually no reasons for two people to have that many Apple devices in one room.

The most effective product placements are subtle. If you aren’t aware of them often they go simply unnoticed. Don’t believe it? Check out the slideshow below to see all the product placements in season two. Let us know, in the comments, how many you saw while watching and what you thought of them.

Product placement from House of Cards 2 from BrandsAndFilms