The fuel behind any social media network is content; and most often, user-generated content. Going into an event like the New York International Auto Show, the preeminent mobile-based social network, Instagram, was positioned for traffic better than any other mobile application on the market, especially with its recent release to the Android network the very same week.

Tier10 was tasked with covering the show for the New York Acura Dealers Association (NYAA). We’d covered the North American Auto Show (NAIAS) with a good amount of success, both in the content we created and the traffic that content generated for AcuraSocial.com. A smart social media strategy, high-quality photo and video content, and an efficient content distribution stream were the primary tactics responsible for this campaign’s success.

One small tactic, though, did act as a spark plug to the buzz created by the NAIAS campaign: @NAIASDetroit on Instagram. The North American International Auto Show did a fine job promoting the week’s festivities on Facebook and Twitter, but neglected the then thriving photo-sharing, mobile-based application. So, we jumped on it.

While covering Acura’s presence at the show in Detroit for NYAA, we also covered the show at-large, all of the vehicles and manufactures, and posted them to @NAIASDetroit on Instagram. To the public user, the account would have appeared to be hosted by the show, as the Instagram name identically matched the show’s official Twitter handle: “@NAIASDetroit.” 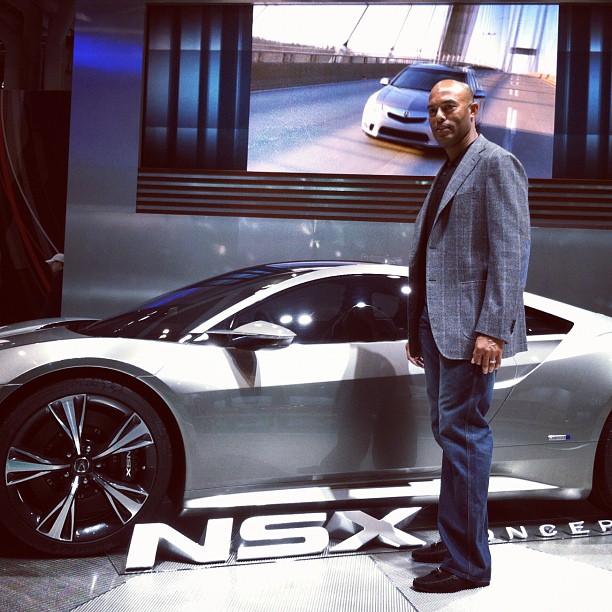 The results were modest: 148 Photos, 175 Followers that begat 1003 total “Likes.” The value came in realizing that we could leverage an emerging mobile application like Instagram to build buzz. Any digital marketer will tell you, the hard part about gaining virality in a digital/social campaign is achieving the critical mass needed to push your content to the amount of users required in the campaign’s initial moments… basically, you need a catalyst. In this case, Instagram, by way of the @NAIASDetroit handle, brought us that spark.

Fast-forward to March of 2012, one month before the New York International Auto Show. We’re in full preparation-mode, building out an ambitious set of creative assets – original blog posts, a comprehensive infographic, and an animated video infographic, to name a few – to hit the Internet by the Show’s opening Press Day, April 4th.

Running off a strategy that learned from, and improved on, the tactics that drove the NAIAS campaign, we ran an audit of the social media platform NYIAS had built to that point. Thorough profiles had been built out for Facebook and Twitter, but again, Instagram was forgotten. (Google+ was also not built out. A huge mistake on the NYIAS’ part, but a discussion for a later time.)

Tier10 Creative Director and Co-Founder Scott Rodgers, who led the NAIAS Instagram effort, helmed the account that became @NYAutoShow. This time, we hit it out of the park: 91 photos, 5,582 followers that begat 26,618 “Likes,” and average of 292.5 per photo. This level of engagement figures would please any digital strategist.

One highlight of the @NYAutoShow feed included a visit from the New York Yankee’s Mariano Rivera to the Acura booth. Mariano, a spokesperson for the New York Acura Association, took pictures with a long line of fans at the booth, many pictures eventually winding up on users’ own Instagram accounts.

Why the North American and New York International Auto Shows overlooked the value an application like Instagram could yield is beyond me. The application had been a sensation for for the past six months, and absolutely on fire since being made available for the Android network… the week of the Show!

Authoring the NYIAS Instagram account allowed us to “@mention” the New York Acura Association (@NYAcura) at will. The size of @NYAutoShow‘s following lent prime exposure to the content of each photo, and caption, therein. Believing there was a certain amount of responsibility that went with producing content for a profile with the New York Auto Show’s moniker, we covered the show fervently, capturing as many manufacturers as possible, each in their best light. 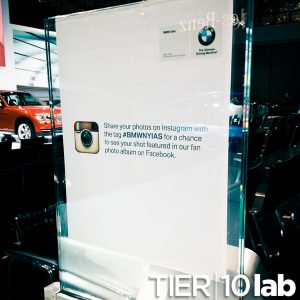 BMW, in particular, made reference to Instagram on the spec-sheets beside each showcased model at the Show. The call-out, seen in the image to the right, was subtle, but still a progressive marketing move for a brand that’s seen it’s competitors (Audi) gain traction and public appeal in recent years.

Conservative analytics show, now, for more than 24,000 photo views, 9,600 video views and a total social engagement metric of over 94,000. (Total Social Engagement = The total “likes”, “shares”, “retweets”, “pins”, and the like.) Not a single ad-dollar was spent on this campaign, just strong creative content optimized with social SEO best practices.