Car Mode: The Solution for Texting and Driving?

by AllyReis
in Automotive, Mobile, Technology
0

As many now know, texting and driving has become a serious safety hazard for those in our technology-inundated world. As auto manufacturers and smartphone companies alike have worked to combat this ever-prevalent danger, designer Joey Cofone may have developed a solution with “Car Mode” for iOS 7. Though not currently an available feature, this integrated setting may soon be available in an iOS 7 update. It was designed to be an integrated part of iOS 7 rather than an app so that more people would be likely to utilize it while driving.

Much like Airplane Mode, already a frequently used aspect of iPhones, Car Mode would disable certain aspects of the user’s phone while in the car. Once the phone connects to the car’s Bluetooth, Car Mode would be activated, preventing texts from being sent or received. If a user doesn’t have Bluetooth in their car, they would ideally be able to manually activate Car Mode from their home screen. 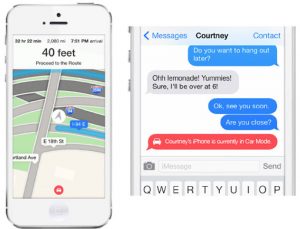 Should a user receive a text while Car Mode is activated, an automatic response will be sent in return stating that Car Mode is on. While driving, users would only be able to receive or send hands free phone calls and hear navigation directions from Siri. Once the phone disconnects from Bluetooth or Car Mode is deactivated, all functions will be enabled again.

Regarding his reason for developing Car Mode, Cofone said, “It’s all about finding where the fault lies — the opportunity to introduce a solution — and designing from there. In this case, it was the realization that people are good at not initiating texts while driving, but terrible at resisting incoming texts. We created a solution that, once people turned it on, completely eliminates temptation until Car Mode is deactivated.”

Cofone proposed the idea at the Command X, a contest for which contestants were asked to contribute solutions for eliminating texting and driving. While the concept is still in the planning stages, Cofone hopes to speak to Apple soon about incorporating Car Mode into iOS7. He also wants to partner with insurance companies in order to track and reward safe drivers using Car Mode to potentially lower car-insurance rates as well as accident rates.