If you’ve logged in to your Facebook recently, you may have seen a banner above your news feed asking you to update your “acquaintances list.” This is most likely part of Facebook’s rollout of its revamped news feed, which was announced last month, and will allow you to adjust your settings so that certain friends appear less frequently in your news feed.

The interface is simple. When you click on the “update list” option, a window will appear with some suggested friends to add to the “acquaintance list.” Chances are some of the people on this suggested list are people you don’t interact with often. On the bottom left corner of this list, you also have the “see all” option, which will allow you to see all of your Facebook friends and select from that list.

The prompt to place friends on the “acquaintances list” is the perfect opportunity to start organizing your friend lists in preparation for the new Facebook news feed, which will feature a multitude of tabs on the left-hand side (see image to the right). 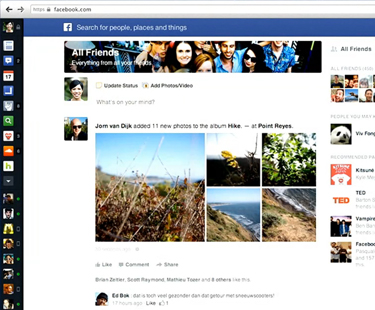 In addition to minimizing how frequently these friends appear on your feed, you will also be able to share posts with “Friends Except Acquaintances,” which is pretty self-explanatory. Additionally, whomever you put on the “acquaintances list” will not be informed that they have been placed on the list. However, if you enjoy the rich diversity of the posts coming from your friends list, there’s no need to update.

However, the ability to add people to the acquaintance list right off the bat will give Facebook a better idea of whom you do and don’t want to interact with, so you can enjoy the most personalized Facebook experience once the updated news feed rolls out.

Based on what we saw during Facebook’s announcement of the updated news feed, it looks like the social network will be relying more heavily on these lists for improved user experience. You’ve probably already noticed on your current news feed that Facebook already has some preset lists for you – separating people from your high school, college, employers or your current city, among others – even if you haven’t set up a smart list in the past.

At the press conference in March announcing the updated news feed and in previous interviews, Facebook CEO Mark Zuckerberg has implied that the company was developing the capability to share with smaller friend groups.

That way you can share what you want with whom you want – and not all your friends. The prompt asking you to update your friends list looks to be a step in that direction.

What the Decline of Third-Party Cookies Means for Users, Publishers