The Rise of In-House Agencies

by tier10
in Advertising, Branding, Digital
0

Effective marketing has long been a multifaceted and complex process that typically required the work of a variety of professionals from different fields. To accomplish this, it was often necessary to seek outside help from multiple third-party agencies. In the new world of creative development, this work has been making its way in-house. While creative agencies are fighting to maintain relevance in this new environment, there’s little doubt that the marketing landscape will soon change forever.

“I remember a time where traditional [advertising] ruled everything, but with new mediums being introduced and more advertising dollars being shifted towards digital and content creation, agencies had to change. There was no other way,” said Tier10’s Chief Creative Officer Scott Rodgers. “We’re in a real-time space right now where turnaround times can be 5 minutes. Other agencies spend a lot of time and money outsourcing to create real-time content that’s five days old. Now [they] have to bring it in-house in order to control turnaround times and keep content relevant.”

The Shift to In-House Production

There has been a familiar process involved with ad creation for decades. Businesses would reach out to creative agencies for help, and those creative agencies would reach out to professionals who were experienced in niche areas. The agency obviously had their own experts, but it wasn’t efficient to keep hired help on staff. Instead, a retainer-like relationship was maintained.

The basic process went in a predictable series of steps:

This is a process that has worked well for years, but as with everything else in life, it has begun to move towards more efficiency. Today, many companies have begun hiring experts that allow them to create their own content in-house. The same is being done with the media buying process. Of course, not every company can do this on their own.

Founded by Scott Fletcher and Scott Rodgers in 2008, Tier10 started out as a full-service advertising agency with its own in-house production, digital, and media departments.

“I think with our backgrounds, we always did everything ourselves. It was about control, being able to control everything – costs, messaging, shortening turnaround times,” said Rodgers. “And, we’ve always done it like this because we’ve always known exactly what we wanted and how to get that final product. It’s something that’s ingrained in our brains. And we knew it was the right thing to do from the beginning and at some point there had to be a shift in this direction. This was our mantra early on: control what you can control.”

“It really wasn’t a discussion or question, we just knew that this was how we were going to do it. And because of the way we started, we are ahead of all these agencies that had been around for a long time. They had a business model where they did high-end production, but had to outsource making it slow moving and expensive,” said Fletcher. “So being the new kid on the block and just starting, we didn’t have the old model to shift away from, we got to start out like this. And, it was also critical for us to create unique selling differentiators for why a brand would want to build with us.”

That fact has led many agencies to begin wearing multiple hats for their clients. Many organizations now handle content strategy, content creation, and media spending all in-house. This allows budding companies to get the most out of in-house production without having to put their own experts on payroll. There is no single predicating factor that led to a production shift, but a combination of certain events and the benefits of in-house production can certainly explain what took place.

“We too have shifted a little bit now and we had to. We have seen the value in having teams and assets around the country, particularly in markets that we serve our clients, that can react quicker,” said Fletcher. “We’re shifting to be even more nimble and have more assets and experts across the country because we know the speed at which things move and it’s always increasing.”

Why the Shift Is Taking Place

The biggest reason behind the shift to in-house production is undoubtedly the changing entrepreneurial landscape. Whereas companies once hoped to have their products picked up by big box stores, they’re now creating their own digital space and dealing directly with customers themselves. This led to an environment where speed was undeniably important.

“Tier10 is in an interesting spot right now as far as content creation. We’re in this world where connectivity allows you to go live at any given moment,” said Rodgers. “Typically, we can go in market, film and be live within a week, and for big production stuff. To be able to travel with our equipment and do what we do on the road adds more of a real-time element to our content.”

People soon started realizing that the whole hierarchy around content strategy, creation, and distribution was hindering their growth. Meeting with a dozen people to discuss strategy and then coming back three weeks later to discuss whether it worked was just too time-consuming.

“Most agencies are not built for quick turnarounds. They can’t respond or react, and they’re backed into outsourcing to do lower budget productions quickly with little direction. By then, it’s too many moving pieces and parts, which slows production down and costs too much,” said Fletcher. “If you’re a brand or a client that needs content marketing, you’re in a tough spot. Either you bring it in-house, or you have to hope your agency’s staff is set up like ours to be able to provide it.”

Fletch also explained “It’s about having talented people that have access to the right equipment and can show up, capture and create content, and do it without a storyboard, without a script, production assistant, or a whole crew. It’s also about being able to say ‘There’s something going on, we need it captured, edited, and transferred back to us ASAP so we can push it through all the right channels.’ And things happen and you deal with it. It’s called the Internet Minute. It’s gotta happen quick.”

Add this to the fact that companies can now collect their own droves of data, and the shift to handling everything in-house becomes a no-brainer. In fact, the $350 million purchase of a digital production company by WPP’s former CEO showed that this shift is now mainstream. 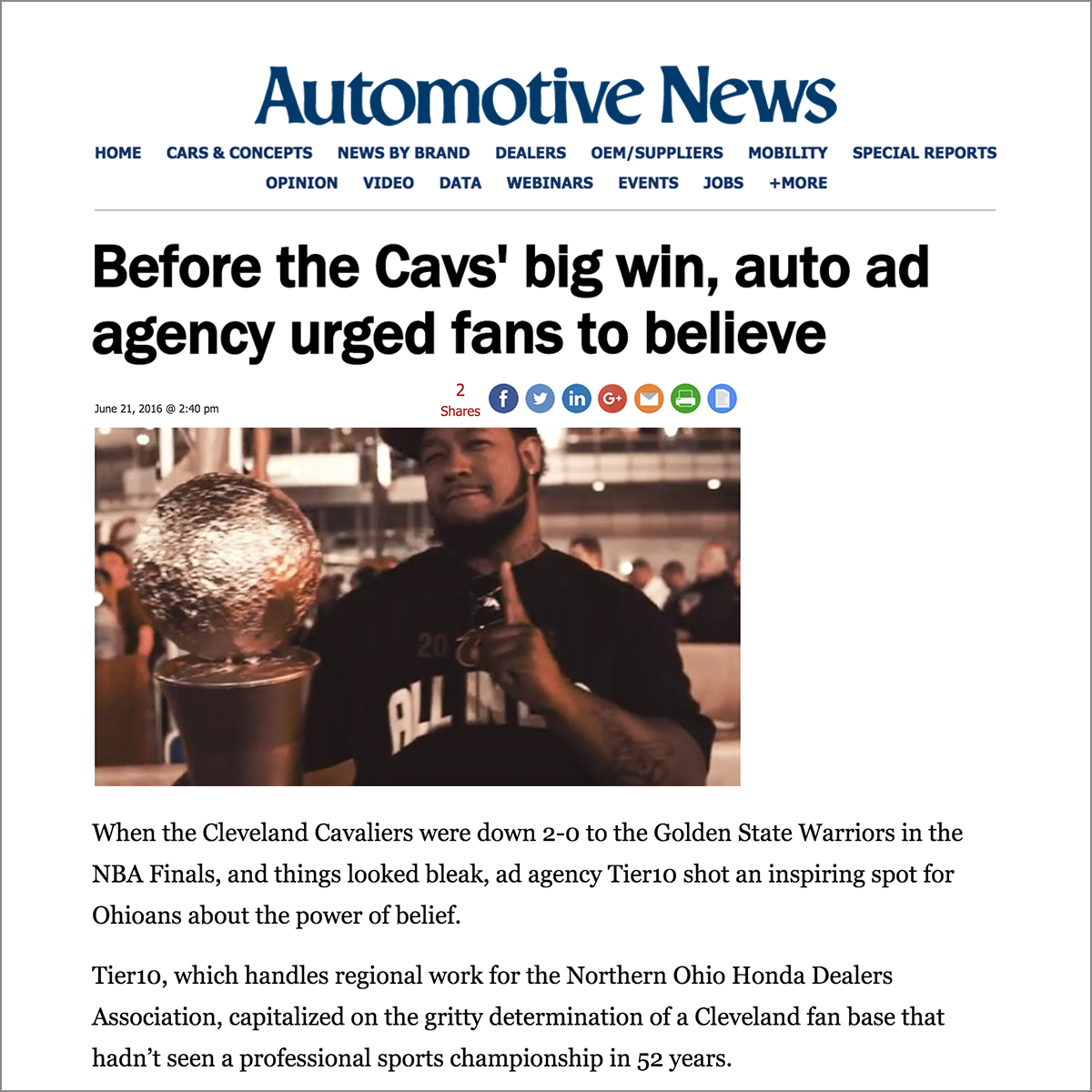 A perfect example of this strategy is Tier10’s work with the Northern Ohio Honda Dealers Association during the 2016 NBA Finals, which was featured in Automotive News.

When the Cleveland Cavaliers were down 2-0 to the Golden State Warriors in the 2016 NBA Finals, Tier10 filmed and produced “an inspiring spot for Ohioans about the power of belief. …Tier10 capitalized on the gritty determination of a Cleveland fan base that hadn’t seen a professional sports championship in 52 years.” The ad’s footage was captured in downtown Cleveland near the Quicken Loans Arena when fans were preparing for Games 3 and 4.

The ad was initially used as a pre-roll that launched a day before Game 4, targeting those in the Cleveland area who searched for LeBron James or Cleveland Cavaliers videos. After tweaking the spot in the following days, Tier10 geo-targeted Honda owners in the area through Facebook. The agency also retargeted consumers who visited the NOHDA website by advertising on other websites. Taking it one step further, Tier10 ran the spot on TV in the region before Game 7.

The ad earned Tier10 a Davey Award and Telly Award.

The advantages of in-house production in the arena of marketing aren’t simply theoretical. At Tier 10, the effectiveness of such campaigns has been proven time and time again. For instance, Tier10 created the “Life Is Better” campaign by utilizing in-market data, and then created detailed customer profiles to align with vehicles in the lineup.

Creating these profiles is often the end of one agency’s story in the process and the beginning of another’s. This is where in-house production is different. Tier10 used the information garnered from this data to identify core beliefs of their targeted demographics and create an ad that appealed to these sensibilities. In doing this, Tier10 was able to more efficiently guide the entire process from start to finish.

Here are a few of Tier10’s award-winning commercials under the “Life is Better” campaign:

Of course, it may be possible that Tier10 is simply great at handling automotive campaigns in-house. The truth of the matter, though, is that the process is the same regardless of industry. The company proved this in 2008 when it helped Shakira hit 50 million Facebook followers and garner over half a billion views on a single YouTube video. The pop artist had attained some previous success, but until this campaign, there was little to show for it in the digital world.

The Future of Creative Agencies

Creative agencies will still have a future, but it will be noticeably different. No matter what happens, marketers will still require an outside perspective that only professional creative agencies can provide. Additionally, even the most ad-savvy companies will still need help with coordination. This means their part in the process will remain essential but smaller in scope.

These changes mean that marketers will start hiring specialists on a temporary basis. The once-common retainer-style relationship will continue to diminish. We’ll also see an increasing amount of ad spending heading towards Facebook, and much of the ad buying will happen right in-house. Marketers will also begin using smaller firms for specific needs within their campaigns.

“When you start outsourcing, you’re just adding layer upon layer of people you have to solicit and pay. Producing everything in-house provides a level of efficiency, and allows us to then forward [ad dollars] earmarked for production to other strategies, like an additional digital spend, that are more relevant and work,” said Rodgers. “Most agencies go ‘We don’t have any more in the budget,’ but we do because of this.”

The fact is that creative agencies have survived hard times before, and they’ll no doubt survive the coming years as production moves in-house. Just like in every other instance of change, however, they’ll be slightly less recognizable after emerging on the other side.

Change Is in the Air

American advertising agencies earned more than $48 billion in 2016 alone, and with over 200,000 employees in the industry, it’s unlikely that they’ll simply go “belly up” at the drop of a hat. There’s no denying, however, that a shift is taking place. In-house ad production is giving companies more control over how their content is created, shared, and updated with data in mind. While this could mean a bleak future for some agencies, the ones that adapt will no doubt be better for the wear.

“Things are changing and moving fast in the marketing and advertising world right now. It’s irresponsible if your agency doesn’t adapt and grow,” said Fletcher. “No agency can sit there and get comfortable as everything is evolving. Your agency needs to be able to see around the corner and anticipate what’s next, otherwise you’re just playing catch up. One thing we try to do best is anticipating what’s coming and be set up in the best position possible to serve our clients.”

Blockchain May Be the Answer to Advertising’s Current Issues

Blockchain May Be the Answer to Advertising's Current Issues