by madeleine coe
in Advertising, Branding
0

Tier10 was named a winner in the 2016 Davey Awards, receiving five silver awards for its video creative. Out of nearly 4,000 entries submitted from the best small agencies, firms, and companies worldwide, Tier10’s award-winning creative was judged and merited to uphold a standard of excellence. 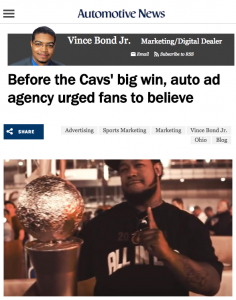 For Commercials in the Automotive Category, Tier10 won silver for “Believe in the Land”, an inspiring commercial that tapped into the spirit of Cleveland sports fans, or “Believelanders”, during the 2016 NBA Finals between the Cleveland Cavaliers and the Golden State Warriors.The spot also received recognition in the print and online editions of Automotive News, where Tier10’s founders Scott Rodgers and Scott Fletcher discussed the spot’s creative process. Tier10 used the spot as a pre-roll ad and ran it on TV before Game 7 in the Cleveland region. “New Kid on the Block”, a spot showcasing the 2016 Honda Civic and Honda’s family-friendly brand, won silver in this category.

“The winners in this year’s competition truly reflect the notion of small agencies executing big ideas. The work entered into this year’s Daveys portrays the smart approach to creativity that embodies the capabilities and talents of small firms across the world,” noted Linda Day, Executive Director of the Davey Awards.

The Davey Awards is the leading international awards competition intended to highlight the best smaller agencies like Tier10 as they compete with their peers to win recognition. It honors the creativity of “Davids” who derive their strength from big ideas, rather than the industry “Goliaths” wielding big budgets. The Davey Awards is sanctioned and judged by the Academy of Interactive & Visual Arts (AIVA), an invitation-only organization of top-tier professionals from the highest acclaimed media, advertising, and marketing firms.

Apple's 'Exciting' Letter to the NHTSA