Last week, Yahoo announced a partnership with Yelp, the online urban guide and local business review site. By partnering with Yelp, Yahoo will bolster its local search data in an attempt to take on Google’s dominance in the search engine world.

“We’re excited about this partnership as another way for Yelp to connect even more people with great local businesses,” said Ali Craig, a regional senior account manager for Yelp.

Yahoo will only display snippets of Yelp data while full reviews, including customer comments, will be available at Yelp’s website.  The reviews and display content will be updated as quickly as Yahoo refreshes its page data.

Prior to the deal with Yahoo, Yelp snippets had been displayed sporadically on Google. In 2011, Yelp accused Google of cheating them of revenue and traffic. Because of the lawsuit that followed, Google pulled Yelp data from their site. Since then, Yelp reviews have not received as much exposure on major search engines. The deal with Yahoo allows Yelp to utilize Yahoo’s major bandwidth to gain even more exposure.

This exposure will pertain to all Yelp industry reviews, including automotive. Craig said that she believes this won’t have an immediate effect on the automotive industry. However, she did say that the integration with Yahoo will elevate the need for the most up-to-date content from Yelp listings including current phone, email and address information.

Google’s current search platform provides information about local businesses in a box on the right side of the search window. When comparing information about a local business there are two major glaring differences between Google and Yahoo. Google’s information is much more concise, focusing on Google Maps, hours and price range. As for reviews, the number of stars is displayed fairly prominently, but users have to click into another window to get to the reviews themselves. Yahoo’s, by contrast, offers a more detailed snapshot of the perception of the business. Yelp reviews are featured front and center, along with traditional information and a description of the business. 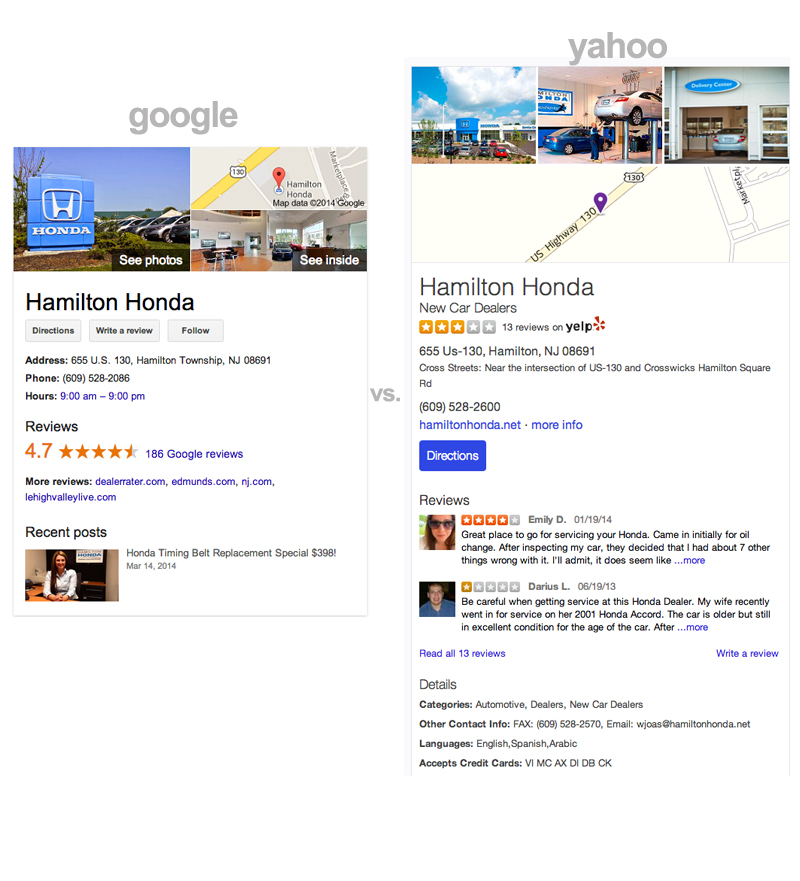 The integration is already live, with more Yelp reviews to be added over time. Yelp review snippets, photos and star ratings will be available on tablet, mobile, and desktop for U.S. businesses in Yahoo Search at this time. There is no word on when Yelp reviews will be integrated internationally.

Cars Are on Their Way to Becoming Mobile 4G Hotspots

Cars Are on Their Way to Becoming Mobile 4G Hotspots